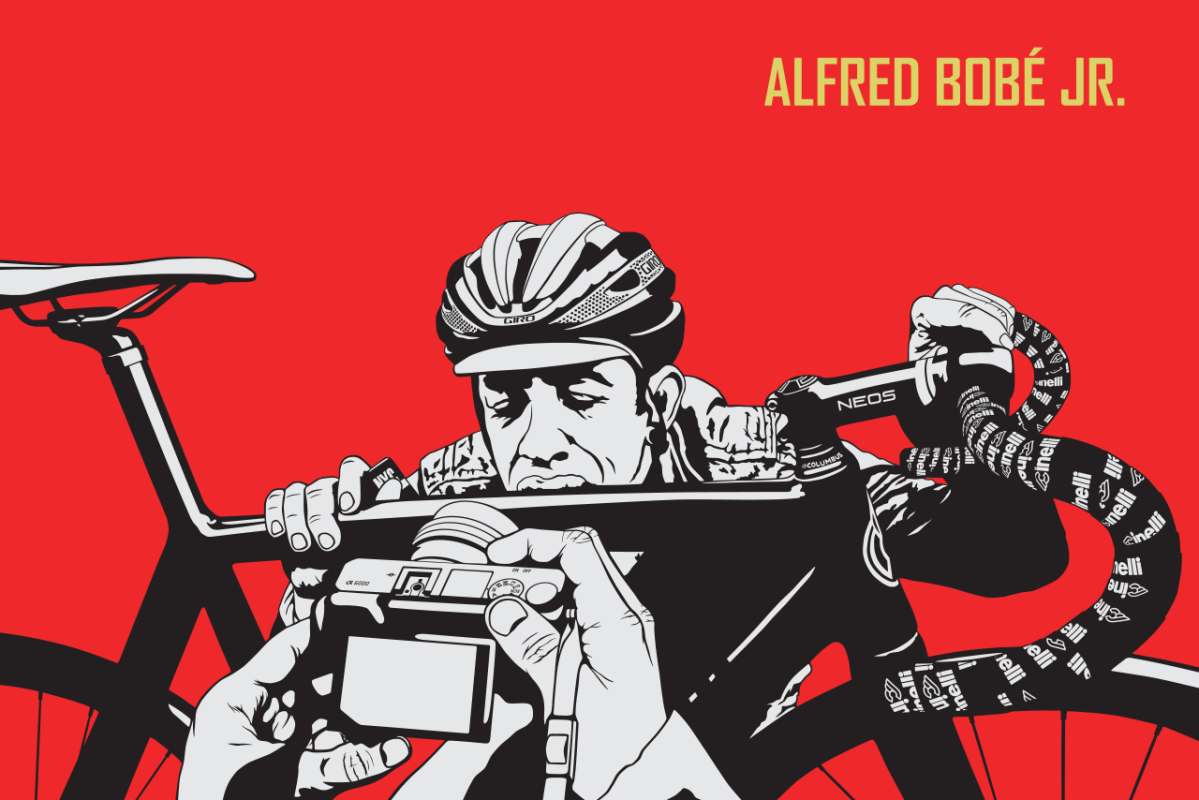 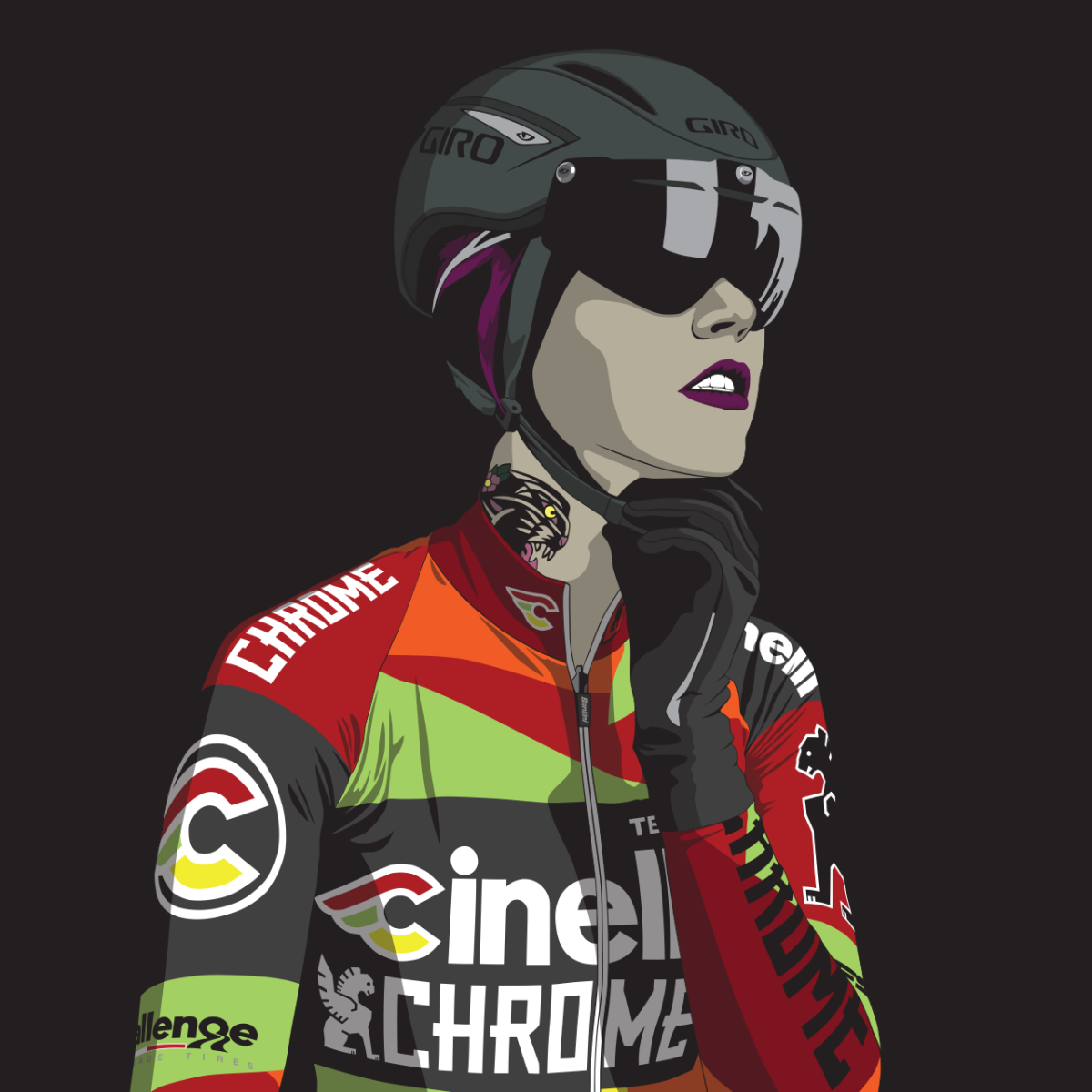 Bio:
“Ana Benaroya is an artist and illustrator working out of Jersey City, NJ in the US. She loves hot sauce, coffee, bright colors, and muscular men. Her clients include National Geographic, Lincoln Center, Nickelodeon, The Philadelphia Museum of Art, and Cinelli. Her work has been honored by The Society of Illustrators, American Illustration, and the PRINT Regional Design Annual. 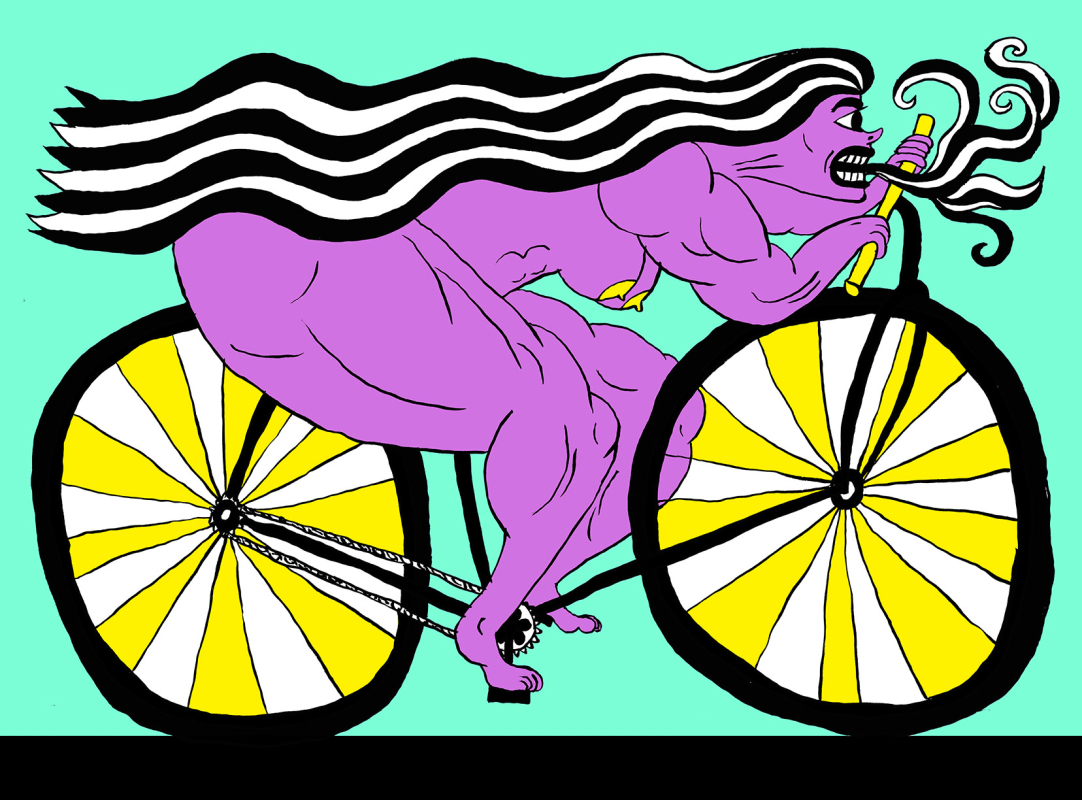 Gerardo Yépiz launched the first Mexican Mail Art website in 1995, his downloadable stencils revolutionized how a generation of young artists, from Mexico City to Tijuana, used street installation and graffiti as a critical forum. Known as Acamonchi, a slang term for piggyback riding in northern Mexico, Yépiz adopted the strategies of street art as the starting point for his fine art while also distinguishing himself as a graphic designer working with clients on both sides of the border including the Nortec Collective, MTV, Reebok,Vans, Adidas, Pepsi, Warner records, Osiris shoes, Tribal Gear, Obey Giant, Rioja Wine,Electra Bikes. Like his moniker, which, he explains “doesn’t really mean anything, it’s just a dumb, silly sounding word,” he uses humor to create graphic works of art that probe serious political and cultural issues. As hedescribes it, “poster illustrations or stickers are common resources of visual communication; in the hands of Acamonchi, and in combination with graffiti tactics, they become veritable terrorist instruments, and the activity becomes a kind of cultural sabotage.”

Acamonchi began his career in the mid-1980s as part of a cross-cultural underground scene in southern California and northern Mexico that was heavily influenced by fanzines and the skateboard-punk countercultures. Music developed his political awareness, and the history of Fluxus inspired his passion for Mail Art. His early work focused on images of the Mexican television host Raul Velasco and assassinated presidential candidate Luis Donaldo Colosio. According to Acamonchi, Velasco represents the mindless entertainment provided by the Mexican media. He describes Colosio-shot on live television in 1994, during a campaign rally in Tijuana -as the Mexican equivalent to John F. Kennedy. Colosio’s face is a poignant reminder of political corruption and Tijuana’s notorious outlaw reputation. Acamonchi makes his point, however, with ridiculous images of Colosio in a cosmonaut helmet, Colosio crossed with Colonel Sanders, and a “Blaxploitation” Colosio just to name a few.

Recently, Acamonchi has focused his attention on painting. His densely layered panels and murals integrate his signature street graphics -posters, stencils, and graffiti -into abstract fileds of color. In this new work, Acamonchi experiments with painterly techniques using aerosol paint, ink pens, and more traditional pigments, Although his explorations are clearly inspired by street art, his distinctive visual statements are something new. “Post-graffiti Art,” as this kind of art was called when graffiti artists first began to show in galleries in the 1980s, does not encompass Acamonchi’s strong affiliation with street art radicalism, and articulate his serious painterly intent. Once again, Acamonchi is inspiring his colleagues as he explores new forms of expression. Rachel Teagle Curator of the Museum of Contemporary Art San Diego.

Born in Ensenada, Mexico, in 1970, Gerardo Yepiz is a major contributor to the worldwide street art and graffiti scene. He is a graphic designer, silkscreen printer and visual artist who has exhibited in the U.S., Canada, Mexico, the UK, France, Spain, Japan and The Netherlands. His work is closely tied to the international music and action sports industries. He is an outspoken vegan as well
as bike activist. Growing up in Ensenada-Tijuana was a uniquely strange experience. Fairly removed to what is commonly considered as authentic “Mexican”
and being overwhelmed by California’s influence, I came across underground subculture in the mid 1980s that became the outlet for my creativity and sociopolitical conciousness. Discovering “DIY” also brought my interest to reach out and to network internationally. Without feeling confined into geographical traps, I was able to gravitate freely, focusing on quirky and spontaneous nature of every day life. Feeling the urge to testify and to record interpretations, I
sought out to freeze ephemera, making the impermanent permanent, the intangible something anyone could grasp and hold onto.

I’m interested in the exploration of mass produced waste and urban environments. I experience its intervals and document alterations found in weathered mechanical patterns and compile them into humorous poetic compositions. This is also a very healing process. Filtering emotions while using discarded materials represents a new contemporary identity of what it means to be Mexican, projecting a daring vision of self and the internal struggle, breaking the mold and creating a brave new example for future generations. 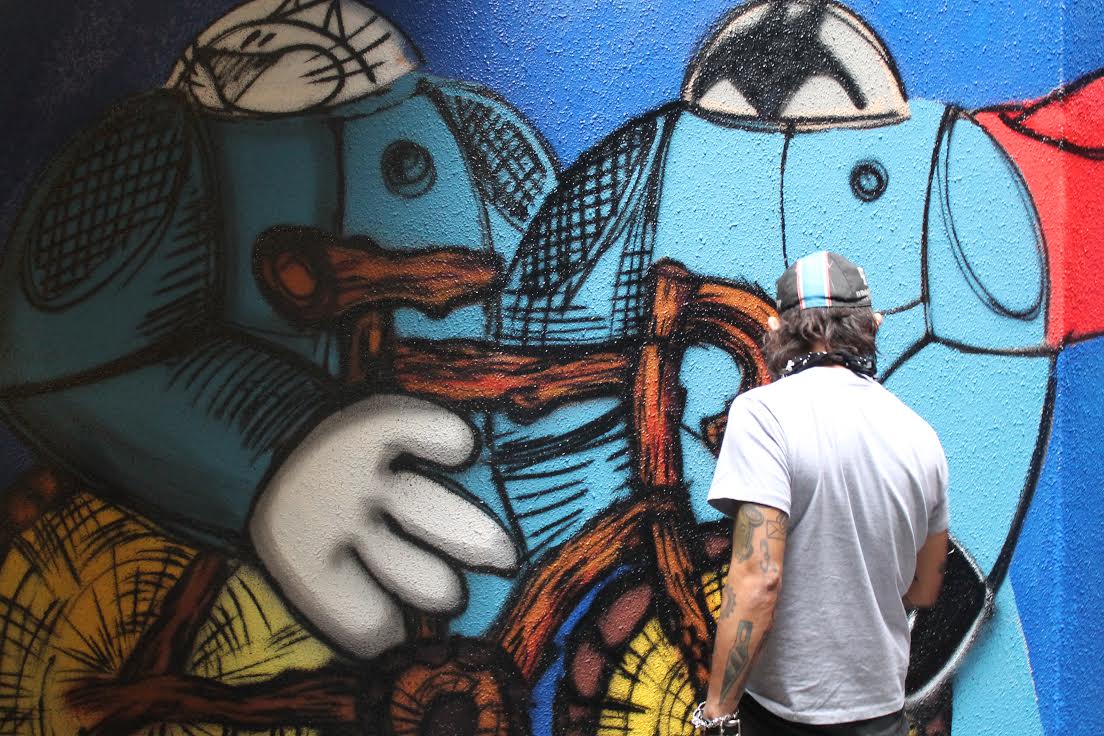 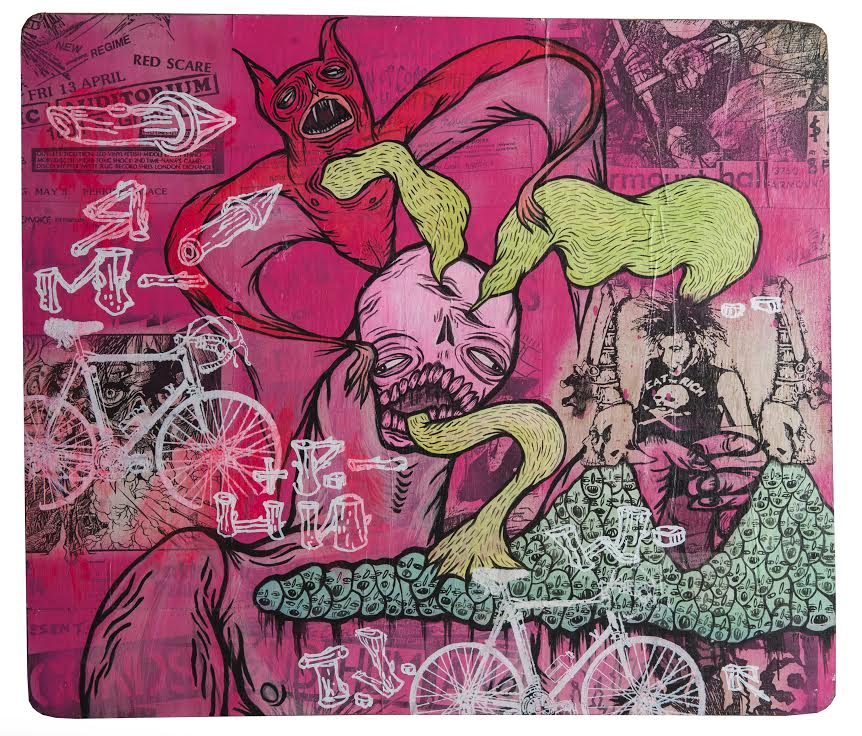 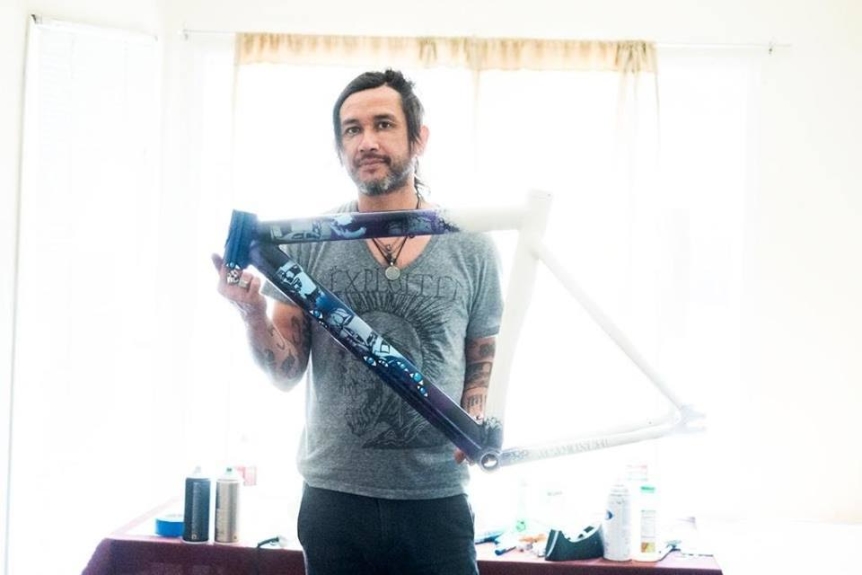 From an early age, Dtone, the self-taught artist has always had an overwhelming passion for art.
He has followed an art education from the age of twelve years in graphic arts and is pursuing studies in designing for advertisement and figurative narrative.

In the 80′s, Graffiti and Tag reinforced his passion for painting.

Inspired by the anatomical drawing, pop art, iconography Ethiopian and comic, the artist particularly appreciates the mix of genres.

From the 90’s Dtone started adopting another approach aiming at encouraging the viewer to own a piece of his work.

Today Dtone can be considered to be a complete artist, a perfectionist and curious, who retransmits in his canvas his visions of the world,

He is also an artist who does not seem to be content with status quo and ready-made thoughts, he likes to question everything and plays with the viewer. Finally he is very interested in lending to the history and theology, and uses pictures and symbols to provoke questions about the origin of things. 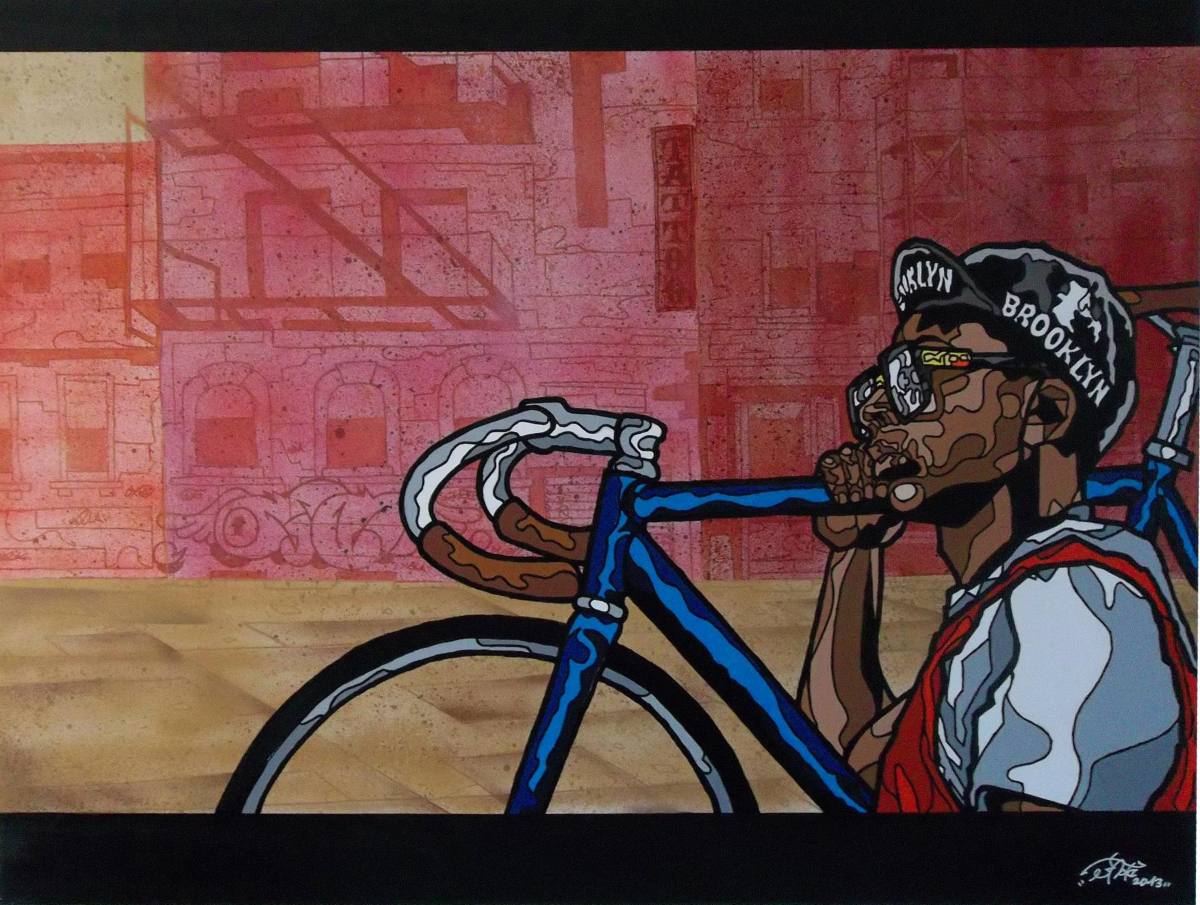 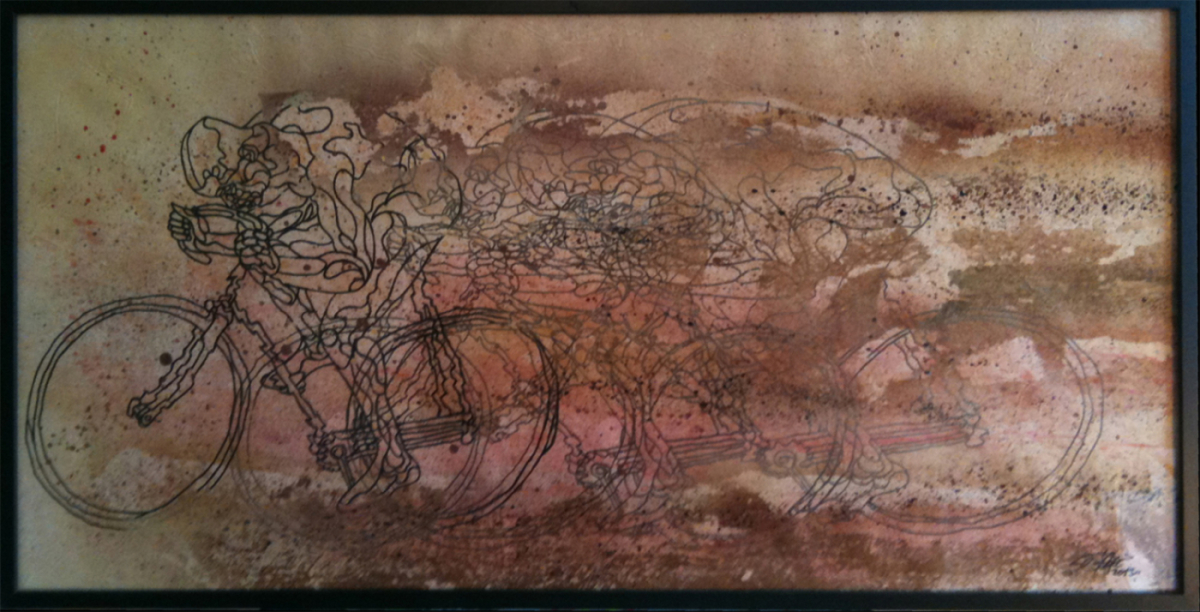 I was born in Carlisle,Cumbria . The family moved to the south of the county when I was veryyoung . At 16 I went to Lancaster Art College to study Art and Design . Since then I have done avariety of different jobs, some art and design related others not. Straight from college I travelled through France and Spain picking fruit in different areas . This has had a massive influence on my life.At the moment I work as a Higher Level Teaching Assistant at The Lakes School. During a typical day I use my drawing skills in different lessons to help and encourage children.This is a collection of my most recent work . Many of the lino prints I have done with Wilf’s Café inmind . I have tried to incorporate cycling ,food ,drinks ,the outdoors and a sense of past and present . I start each piece by selecting a background .It may be a random wash or a more structured format . Then I introduce my characters and lettering . By working this way each print is different .They maylook similar or be totally individual . I am influenced and inspired by Cumbria , holidays abroad , music ,my two boys and my artist wifeThuline . My work is very design based , an image my get taken further and put on t-shirts ,mugs etc .

As long as I can remember there has always been a bike around the house . One of those specialmoments I recall as a young boy was the time my dad pushed me across the yard . I pedalled ,stayedupright and experience my first solo journey on a bicycle . Over the years I have enjoyed many brilliant travels in America and Europe . Moving throughchanging landscapes on two wheels, meeting new people and visiting new places . It is exactly the same relationship I have with drawing . I have always had a pen or pencil with me ,wheather when I’m supporting children in school or for my own enjoyment at home . Recently while in an Art class I discovered printing. As this was new territory I stuck to what I know! So my early images are based on the things I’m interested in .That is how my Bike/Art started . Over the months it would seem I have hit a familiar chord with others around the World , with more and more people liking my prints .I call it “the 4 C’s “ ! Cycling ,Coffee , Cake and Cerveza . It’s a sport that allows you to go somewhere with people or on your own and on route in enjoy both food and a drink . I hope in my work I capture the simplicity and movement of riding a bicycle as well as a sense of history and tradition .I am interested in both the latest and earliest of cycling images . Another important element in the feel of my work is where the bike is, it’s environment . With the help and support of my wife Thuline we have created a range of cycle ware . Starting with handmade greeting cards and prints . Which developed into note books and mugs ,concluding with cushion’s , coasters and t-shirts . Their appeal with both visitors to the area and those who live and work in the South Lakes has been pleasantly surprising . I count myself very luck that a live in an area of outstanding beauty-The Lake District and that my wifes Gallery (www.thuline.com )is in pretty market town of Kendal . 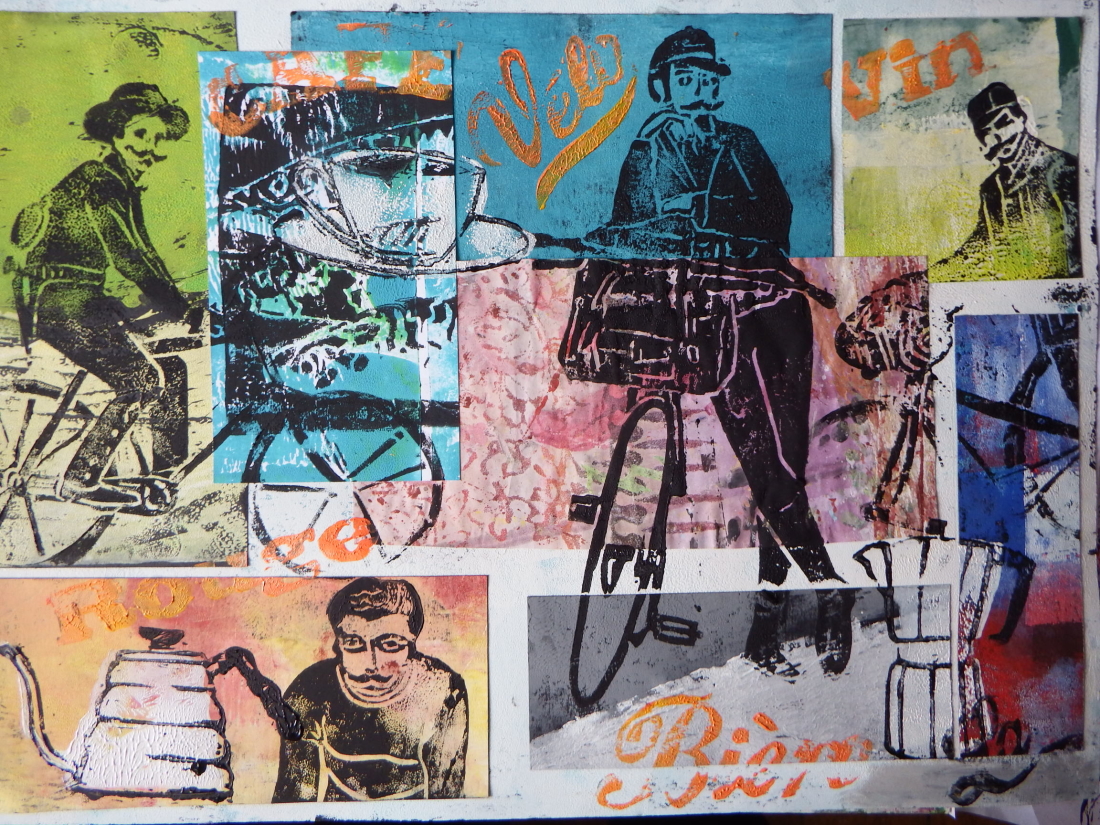 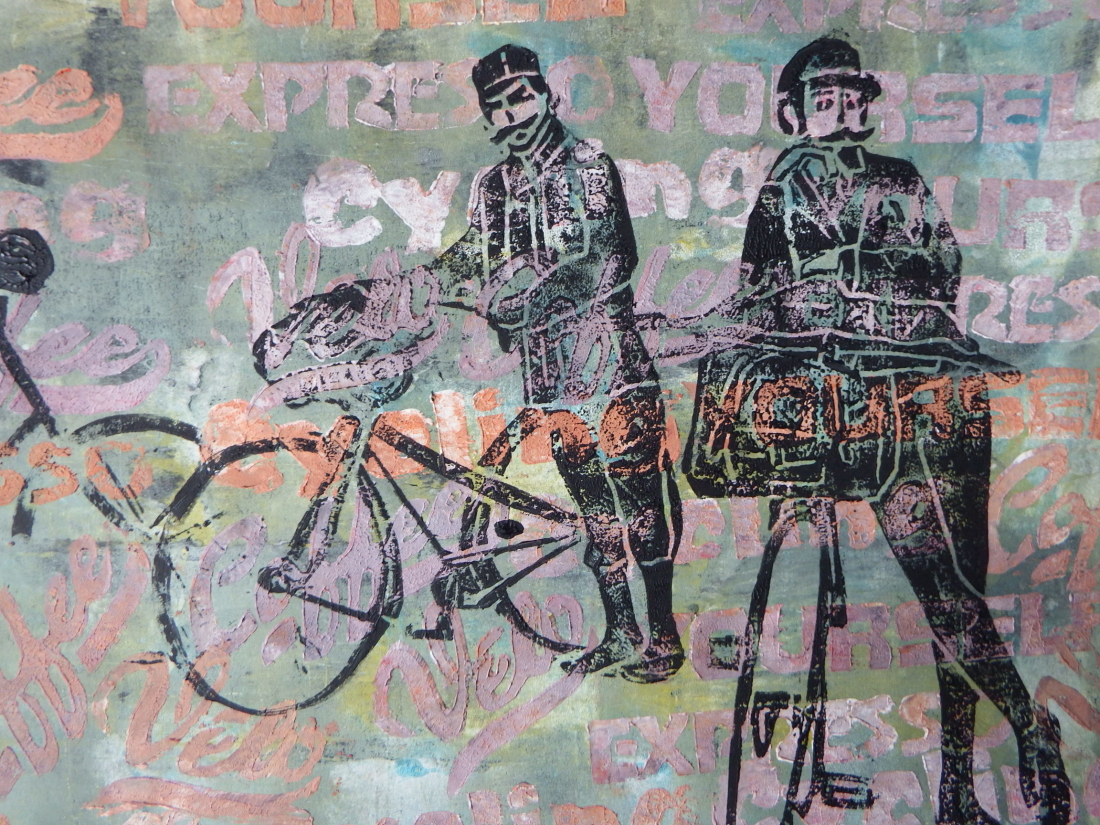